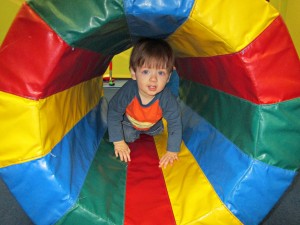 It's pretty much official: I have a toddler.

His pediatrician is pleased with his developmental progress:

He didn't really "get" Christmas this year. He was fascinated with Santa when we took him for pictures. But on Christmas morning, as we tried to direct his attention to his gifts, he just wanted his morning Cheerios.

We kept things low-key this year. He got a play kitchen and fake food from Santa, and we did "Want-Need-Wear-Read" for his gifts from us. He got a toy laptop for his "Want," a pair of soft-soled shoes for his "Need," an adorable outfit (pants, shirt, and fleece-lined flannel) for his "Wear," and 3 Berenstein Bear books for his "Read."

Then there were the gifts from grandparents, aunts/uncles and cousins, which I think put us over the maximum occupancy for our apartment. We are so grateful that Liam is so loved, but seriously, where do we put all this stuff??

At the moment, his favorite gift is this activity cube:

He also received a trampoline (probably a close second to favorite), a play zoo with LOTS of animals, an inflatable play area/ball pit, and a wooden stack-and-sort puzzle.

Liam eats 3 meals a day, plus two snacks. He nurses four times a day (first thing after waking, before each nap, and at bedtime). I have discovered that he will drink whole cow's milk with no problem, as long as I'm not around.

What does Liam eat?

Breakfast is usually with Daddy, and consists of Cheerios and a banana. Heaven help you if you don't give Liam a banana. The boy would LIVE on bananas if we let him. Sometimes he gets a Trader Joe's multi-grain waffle. Sometimes whole-wheat toast. Sometimes I'll make pancakes or French toast. Sometimes The Mister scrambles some eggs. But always a banana.

Morning snack is usually blueberries, or a recent new favorite, pomegranate seeds (thanks to Brittany at A Healthy Slice of Life for the idea!) and graham crackers. We've run into a problem where most fruits that we normally keep in the house (apples, grapes, oranges) give Liam bad diaper rash. So, I need some non-fruit ideas for snacks. 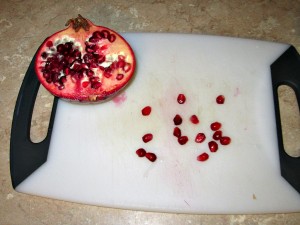 Dinner is whatever we eat. Liam had his first cold recently, and didn't want to eat anything but Cheerios, but he's gotten over it, and last night we had baked breaded chicken tenders and sweet corn, and he ate everything in front of him!

It's getting a bit harder to take Liam out to eat. He's going through a phase where everything must be on the floor. If anything is on the couch or on a table, he pulls it onto the floor. Same goes for in the restaurant — food, napkins, silverware, toys all get thrown on the floor.

If you'd like more inspiration for Munchkin Meals, head over to A Healthy Slice of Life and click on the link-up thumbnails!