Mardi Gras is just around the corner, which means it's time for beignets! This is a classic New Orleans recipe, deep-fried then coated in powdered sugar, and served with raspberry jam. 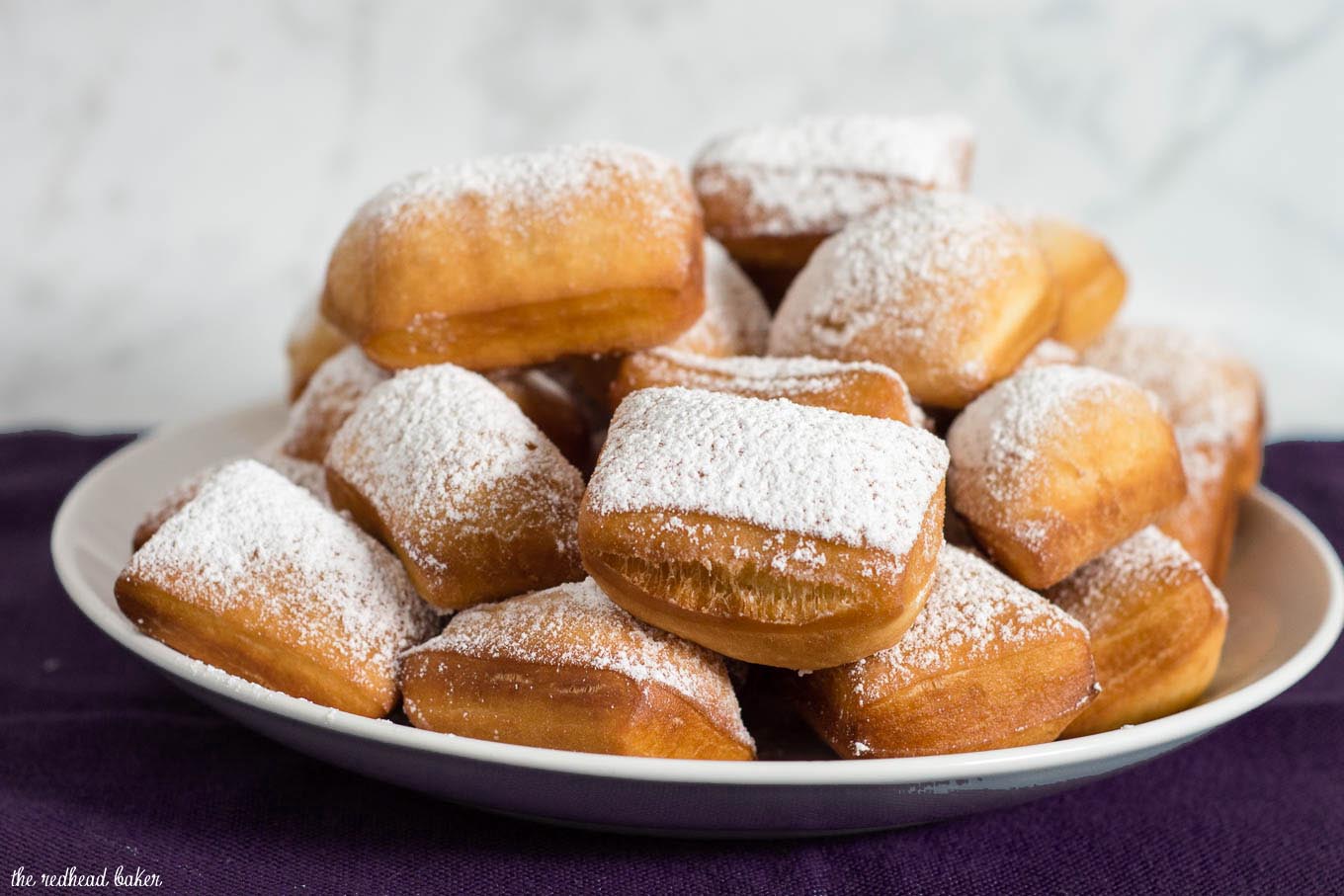 Mardi Gras is just around the corner. I'm sure you're aware of what people do on Mardi Gras:  indulge in fattening foods and/or alcohol. But do you know why? Mardi Gras literally means "Fat Tuesday" in French. It's the day before the first day of Lent, a solemn time in some Christian denominations where followers practice self-denial for a variety of reasons. Mardi Gras came to a be a sort of "last hurrah" before the long period of Lent.

If there's one dish that says "Mardi Gras" more than any other, it's probably beignets. Though fried pastry dates back to ancient Rome, beignets come from the French. Some traditional recipes use fried choux pastry, and others, like the one below, use a fried yeast dough. Using a yeast dough results in beignets without pockets in the center, so if you want jelly-filled beignets, you want to use a choux-pastry beignet recipe. 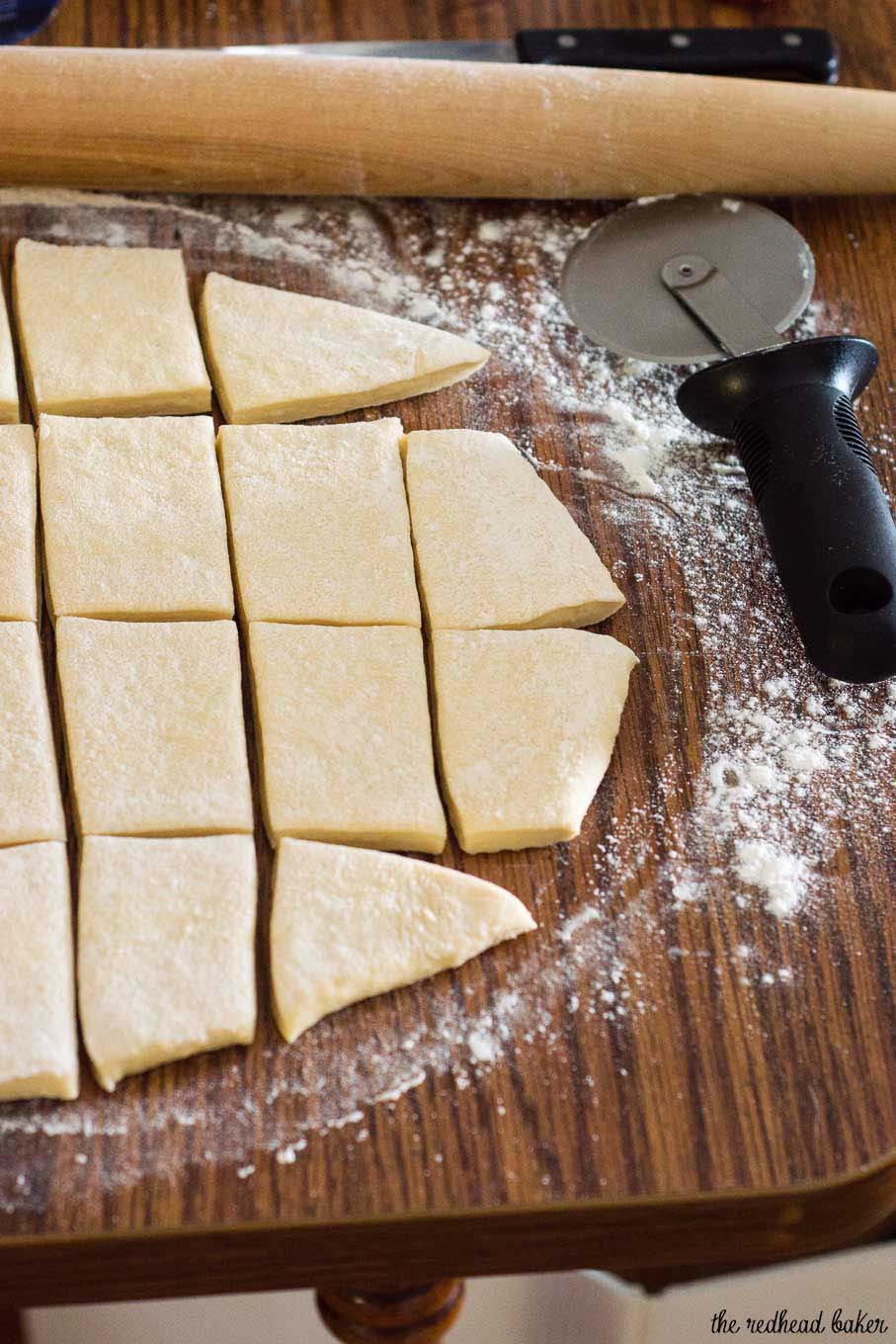 This is a really easy dough to mix, and if you use a thermometer to measure your water temperature for mixing with the yeast, it's really foolproof. If you've never kneaded dough by hand before, I have a video tutorial here. The video is for pizza dough, but the same technique applies.

You also don't need to break out a ruler to measure out the cut squares of dough. Fried dough puffs out when it cooks, so rough cuts are just fine. No need for perfectly straight lines and square corners. They're supposed to look rustic! 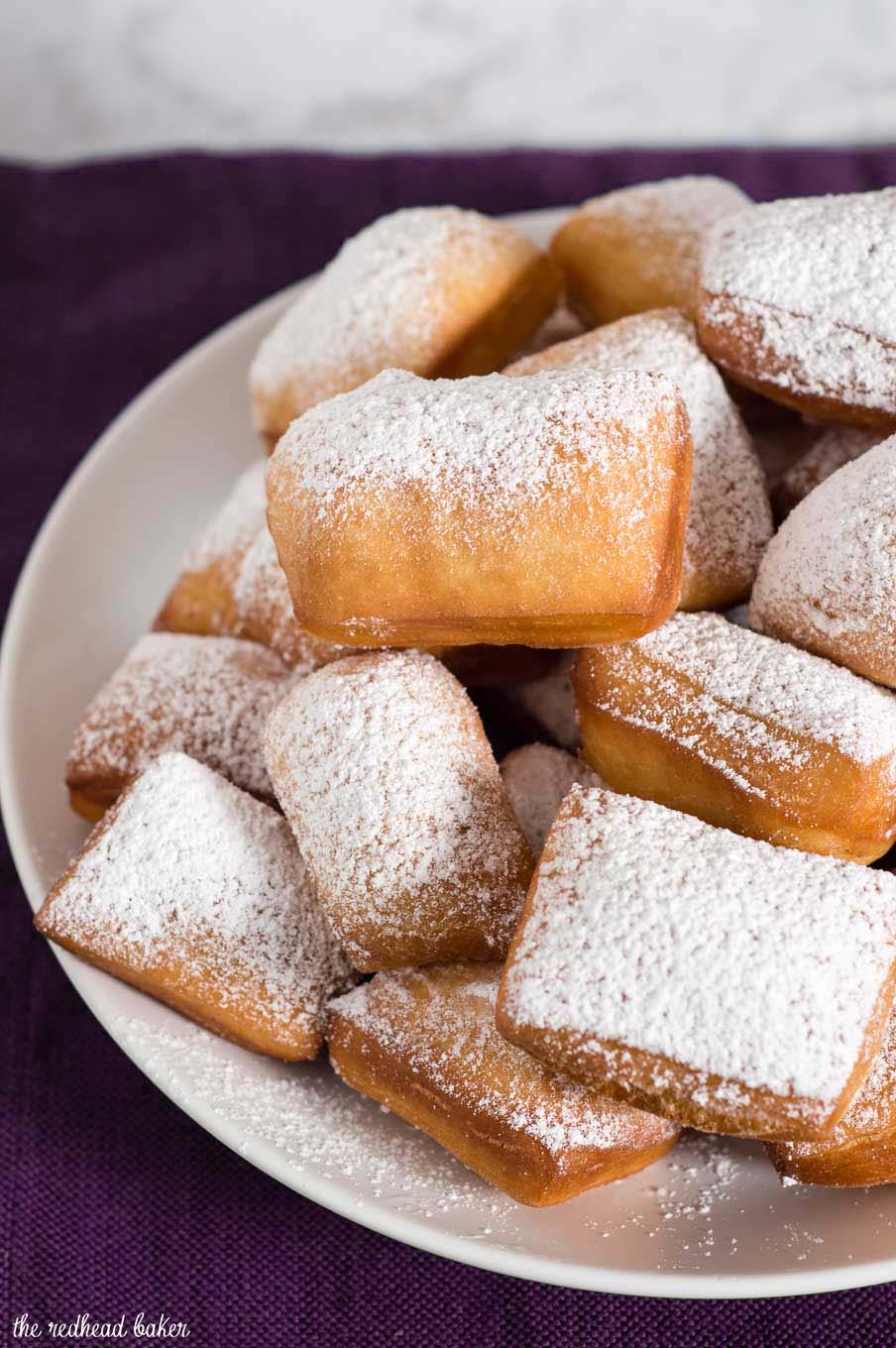 Beignets really need to be made as close as possible to the time that they will be served. The longer they sit, the more the texture changes, and not for the better. The dough can be made ahead of time and frozen, but it should be fried just before serving.

Traditionally, beignets are dusted with powdered sugar. As I mentioned above, some beignets are filled with jelly, but since yeast-dough-based beignets don't have a pocket for filling, I served the jelly on the side. Chocolate or caramel sauce would also be delicious as dips for beignets. 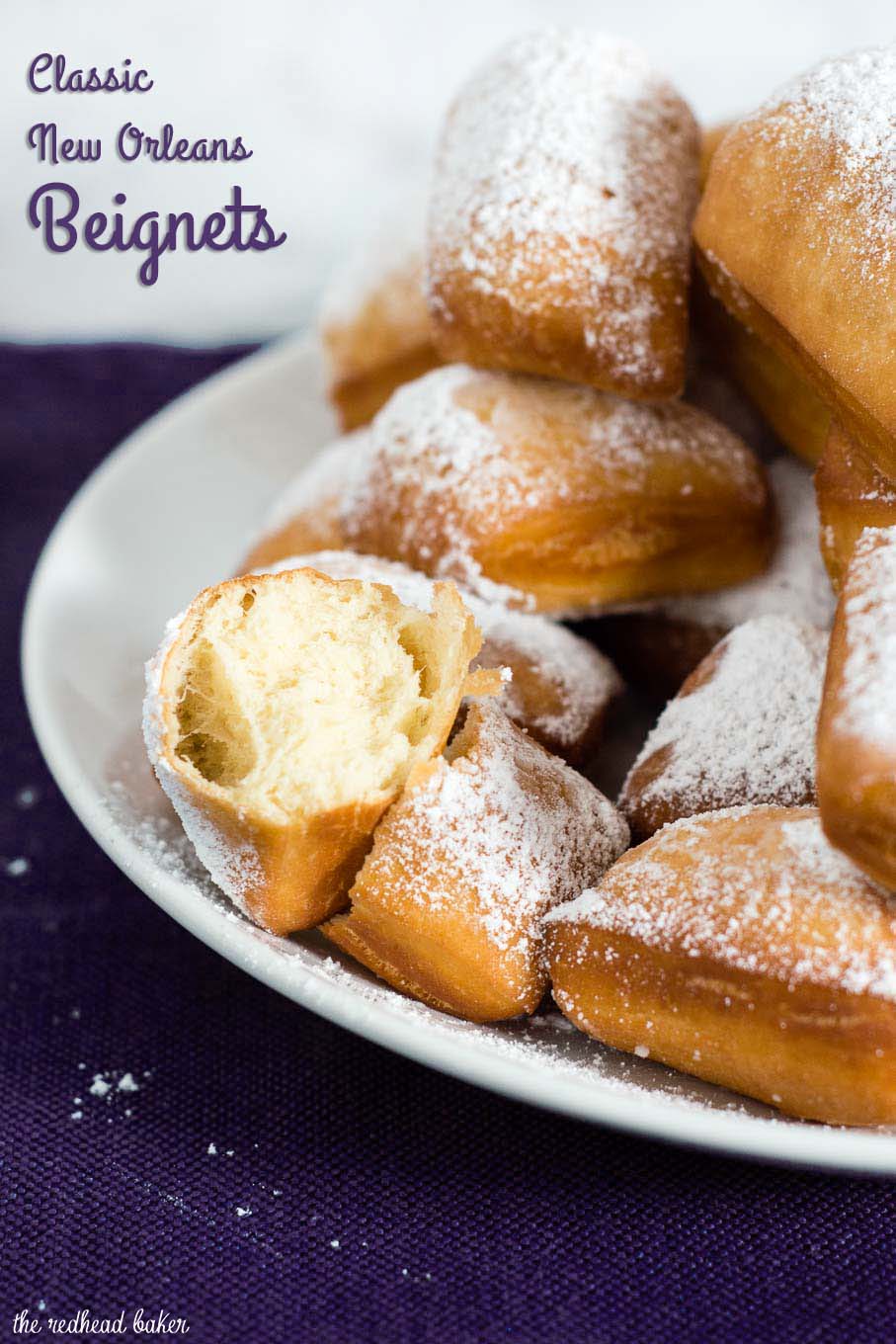 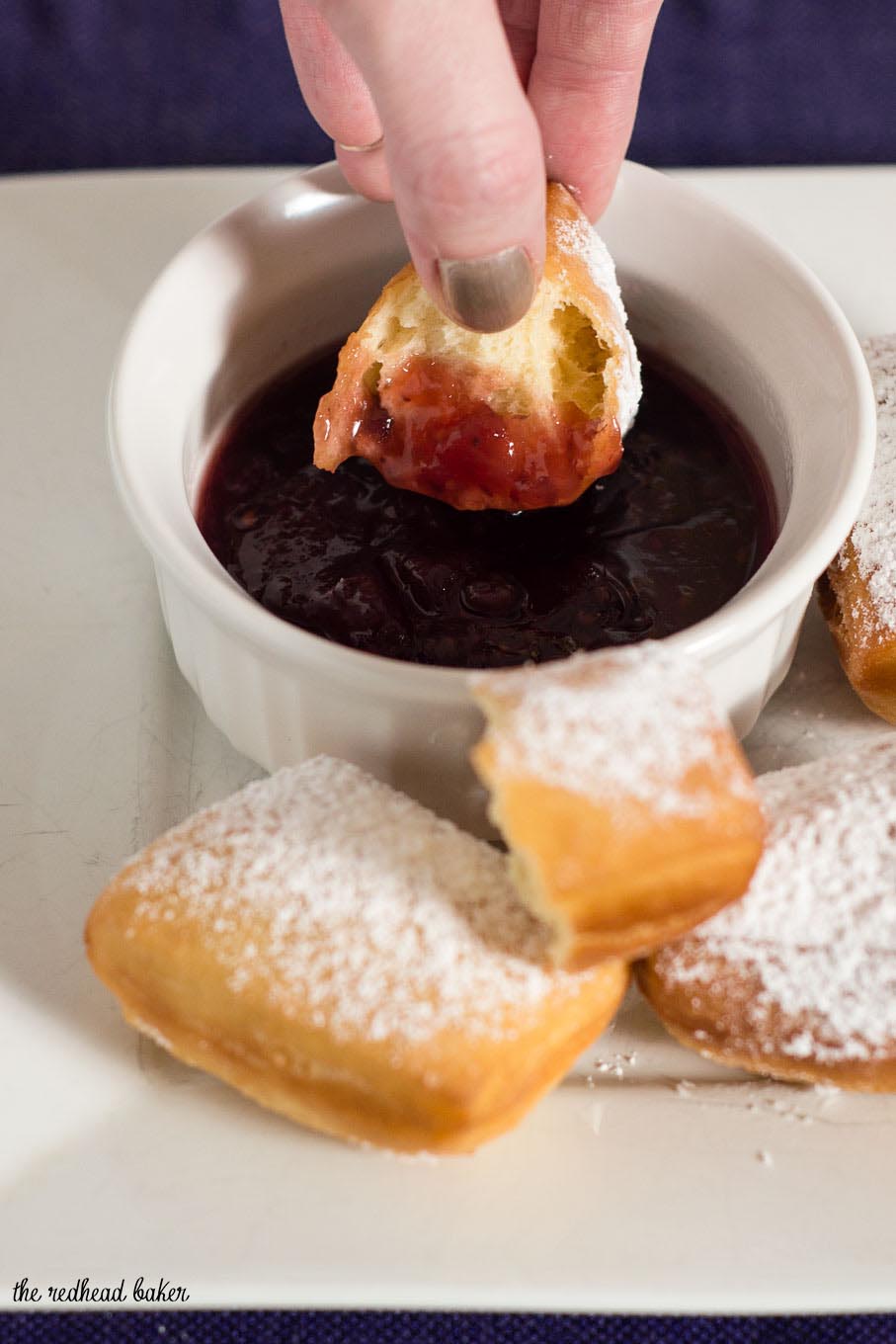